Share this:
The following are images from the book Brightside Gardens. You may also view a virtual tour of the Gardens on YouTube.

The garden is an oval of flat river stones surrounded by staddle stones, sweet box, and kousa dogwood; underneath the stones is a smoke generator, which will turn the Vale into a Scottish moor. Lights from above shooting down and on the ground shooting up give the Vale and the “Midsummer Night’s Garden” an unearthly glow. 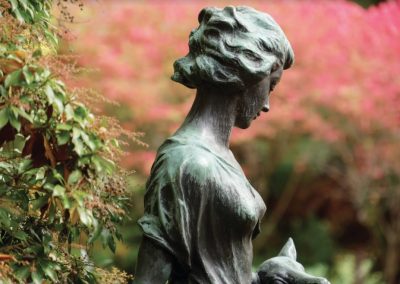 Shy one, shy one

This statue brings to mind a favorite poem: Shy one, shy one, Shy one of my heart. She moves in the firelight pensively apart. She carries in the dishes And lays them in a row. To an isle in the water With her would I go. W.B. Yeats 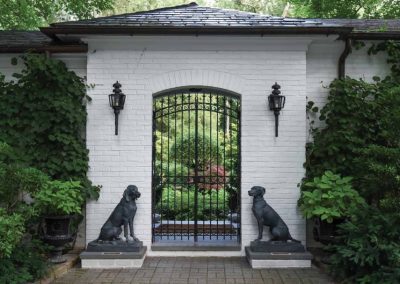 Baltimore Court was modeled to resemble a Baltimore neoclassical chest of drawers, with an oval in its center. Visualize the dark bricks as a satinwood border; the oval is satinwood as well. The oval and the circle were leitmotifs in Baltimore furniture. When the great oak in the center of the oval died, we replaced it with a circle and a Bosque elm. 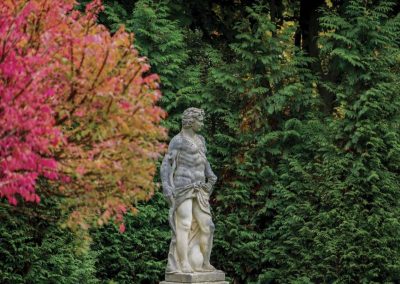 Acteon’s Copse is the garden of loyalty. Acteon was a young Greek hunter known for his physical beauty, his mind, and his courage. 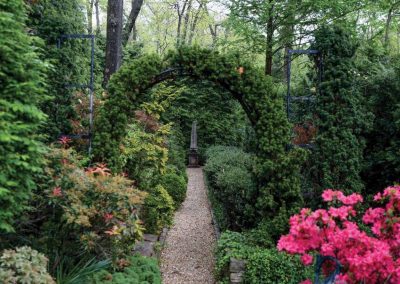 Sic Gloria Transit Mundi are the words that a slave spoke to a Roman general during his triumph. My translation is you may be great today, but tomorrow no one will remember your name. We have all experienced this several times in our lives. The trick in life is to continually reinvent yourself so you can have another chance to contribute to the world. 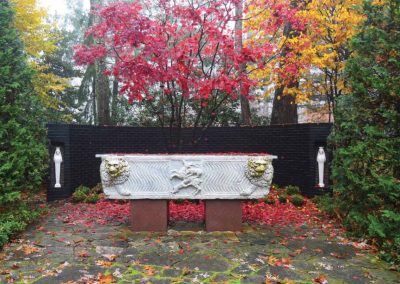 This is a strigilated sarcophagus (200 A.D.) from Asia Minor, possibly Pergamum or Ephesus. It is dedicated it to Attalos III, King of Pergamum, who gave his Greek city to Rome so it would not be destroyed by Celtic barbarians. Amy and I will face the same future with our garden. 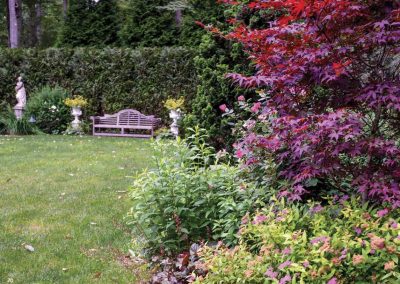 Jessica’s Garden is a formal English border garden in the shape of a rectangle surrounded by an Arborvitae hedge. Jessica was the beautiful young lady who designed our border garden and submitted a pen- and-ink garden plan that would rival anything that Gertrude Jekyll ever conceived. The garden stands today as a testimony to her artistic talent. 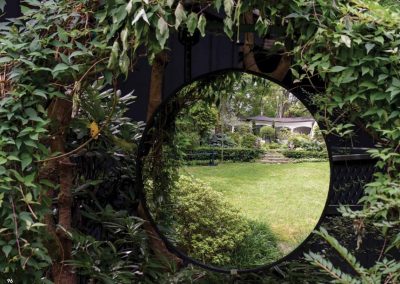 The Circle of Life Garden

Our Caroline gable rhododendrons are in full bloom with the Delaware valley azaleas. The Circle of Life Garden shows that life is a circle of living things feeding upon each other, but maintaining the balance of life. 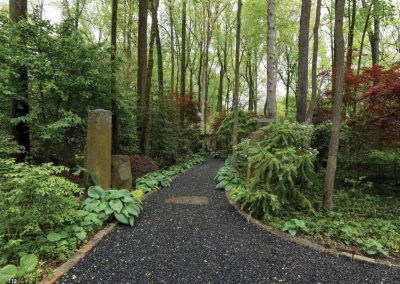 You are at the entrance of the wild wood. Brightside is a neoclassical garden, but its roots are in a Renaissance garden where the formal gardens (the bright side) are around the house. The formal gardens represent civilization. Eventually the path leads to the inferno or Wild Wood of Dante, the Sacro Bosco. 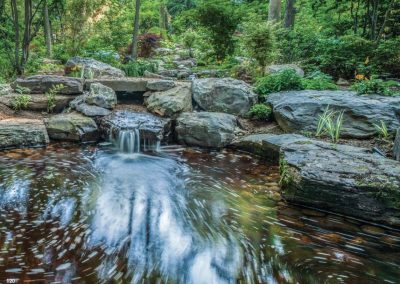 A short way from the center of the wild wood is a stream we call the River Styx. The River Styx in Greek mythology was the river you had to cross before entering into Hades. 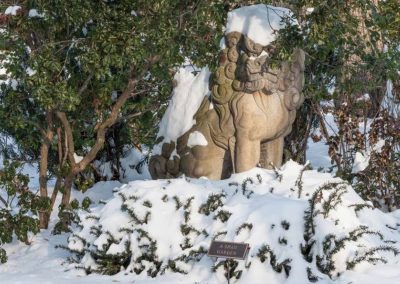 It was in the A Shau Valley, Vietnam, close by the DMZ, that I became a man. This rock and cup garden is my mind’s remembrance and a recreation of the A Shau Valley landscape. By the entrance are two granite Kaylins, the mythical guardians of Buddhist temples, and the warrior lions of China similar to the lions of Rome (the Legions) that protected civilization for 1000 years. In the distance stands a six-foot 19th century carved stone Japanese Samurai warrior monk. 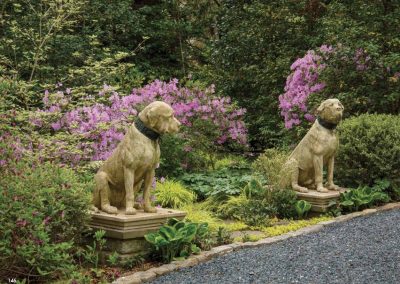 Elysium is the graveyard of our dogs and cats. They have been our companions through all life’s vicissitudes. Dogs are your friend when the rest of the world has abandoned you. Animals have a special purpose for men and women. They take care of us, and we take care of them.